In May 1779, two slaves named Prime and Prince dictated, or at least cowrote, a petition for emancipation, which was submitted to the Connecticut Assembly.

Your Honours who are nobly contending, in the Cause of Liberty, whose Conduct excites the Admiration, and Reverence, of all the great Empires of the World, will not resent our thus freely animadverting, on this detestable Practice; altho our Skins are different in Colour, from those who we serve, yet Reason & Revelation join to declare, that we are the Creatures of that God who made of one Blood, and Kindred, all the Nations of the Earth; we perceive by our own Reflection, that we are endowed, with the same Faculties, with our Masters, and there is nothing, that leads us to a Belief, or Suspicion, that we are any more obliged to serve them, than they us, and the more we Consider of this Matter, the more we are Convinced, of our Right (by the Law’s of Nature and by the whole Tenor, of the Christian Religion, so far as we have been taught) to be free.

The petition is as heartbreaking as it is poetic, and is worth reading in its entirety. Both the Lower and the Upper Houses rejected the petition; however, the following year, laws were passed freeing slaves younger than 7 (or born in the state after the law’s passage) when they reached 25, and prohibiting the sale of Connecticut slaves outside the state.

The petition was transcribed by Jonathan Sturges, a justice and judge of probate who was very active in Fairfield’s defense and management during the Revolution; later he was a member of the state delegation to the ratification of the Constitution and a member of the first U.S. Congress. And while there is suspicion about the true authorship of the petition, as historian Vincent Rosivach has pointed out, the language echoes that of other slave petitions of the period, such that the 1779 document is not likely the product of Sturges’s quill alone.

What’s more interesting is the petitioner Prime was owned by Samuel Sturges, Jonathan’s younger brother. This is a strange scenario, in which victory would have resulted in diminishing the estate of the proponent’s close family. Perhaps emancipation was never a goal of Jonathan’s and the action was simply a ploy to demonstrate the impossibility of abolition, to cool the tempers of disgruntled slaves before they boiled over — to obscure the obvious contradiction between freedom from king and parliament and bondage to Yankee fat cats. Hey, we tried. It didn’t happen. Now get back to work.

Or maybe that’s too cynical. I’ve read the Rosivach article, and if I recall correctly, his characterization of Samuel Sturges as “undistinguished” is verbatim. This is some minor ignorance on his part (in his defense, Rosivach probably referenced Donald Jacobus’s History and Genealogy of the Families of Old Fairfield, which lists only the public offices and military honors held by an individual, not the private accomplishments). Actually, Samuel Sturges was a prosperous businessman who co-owned “a suitable store for receiving goods & provisions” with Samuel Smedley along Black Rock Harbor. Smedley himself manumitted two slaves — York, and his son Boston (who may or may not have fallen under the 1780 freedom-at-25 law) — and left each of them money in his will. These actions, along with Jonathan’s penmanship and Samuel Sturges’s seeming acquiescence in Prime’s role, suggest some of Fairfield’s elite shared the sentiments expressed in the two men’s poignant request for liberty. 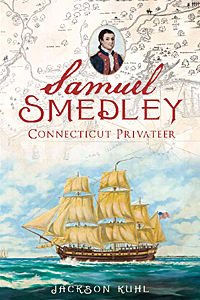