Do your job. Electric Literature says writing is a job “even if it doesn’t pay you as much as you wish it would.”

[S]ometimes the money just isn’t there. If you are writing weird poems on a friend’s Tumblr page that only a handful of people will read, you can’t expect to be paid because there is no money being made. But if you are writing for, say, a big website that gets massive traffic, you should absolutely demand to be paid

I previously inked some thoughts on writers and rip-off publishers here.

“Should we always play it safe?” Barrelhouse has a great graphic essay on writers and writing.

File under Asylum, lunatics taken over the. Trumpkins swarmed the Goodreads page for author Laura Silverman’s latest book, inundating it with one-star reviews because she dislikes their clown prince of politics. Punchline: the book hasn’t been released yet — it’s still in copyedits. Allies responded with five stars to counteract the attacks; meanwhile, Goodreads lethargically removed the troll reviews. Silverman said the incident “scared me a lot, because they were taking it to the next level.” If it’s any consolation to Silverman, I wouldn’t worry about it affecting her career — that’s just another Tuesday for Goodreads.

War of the Pamphlets. To promote the publication of a new, two-volume reprint collection of Revolutionary era pamphlets, the Library of America has posted an interview with editor Gordon S. Wood. Self-published luminaries Samuel Johnson, Edmund Burke, and John Dickinson make appearances, as does Thomas Paine:

He was our first public intellectual, and unlike the other pamphleteers, he lived solely by his pen. As such, he aimed at a much broader audience than did the others, one encompassing the middling class of artisans, tradesmen, and tavern-goers. Unlike the elite writers who bolstered their arguments with legal citations and references to the whole of Western culture going back to the ancients, Paine did not expect his readers to know more than the Bible and the English Book of Common Prayer.

Run Your Own Race. I love running as a metaphor for writing. There are sprints and long slogs, uphills that burn your quads and downhills that kill your knees, and most of all, the work that no one sees, the runs you put in just to show up. Kristine Kathryn Rusch makes the same analogy, arguing that every writer runs at his or her own pace:

I mentioned New York, which had 50,564 finishers in 2014, which made it the biggest marathon ever. Average “important” marathons usually have 35-40,000 finishers.

That’s a lot of runners, most of whom have no hope of crossing the finish line first.

Note I didn’t mention “winning,” because runners are very clear about the varied definitions of winning. Winning for a non-elite athlete might be a personal best.

Affordable Smith. Remember back in 2010 when I complained that inexpensive editions of Clark Ashton Smith’s work were largely unavailable to casual readers interested in learning more about him? Well, after years of financial troubles and improprieties — which finally ended with the company being bought by another publisher — Night Shade Books has begun releasing its five-volume collection of Smith’s work in paperback and for Kindle. Volume One is already out, with the next to appear in January.

The Enlightenment or GTFO. At Tablet Magazine, Liel Leibovitz comments on the PEN American Center shenanigans but might as well be talking about certain parties angry at this year’s Hugo nominations or those advocating avoidance of straight white male writers:

Can you imagine Balzac arguing that a novelist mustn’t scrutinize the poor and the rich alike, as the poor—poor souls—are too underprivileged to pass through literature’s relentless magnifying glass? Or the Bard abandoning Othello lest someone walk away convinced that all Moorish generals were murderous thugs? That would be—to borrow a phrase associated with Wallace Shawn, another of the letter’s signatories—inconceivable. Writers, real ones, grasp for as much of humanity as they can hold in their embrace. Their motto is the one forged by the Roman playwright Terrence millennia ago: “Homo sum, humani nihil a me alienum puto.” I am a human being; nothing human is alien to me.

To the dolts who declined to partake in the PEN gala, Terrence’s words are as much a lifeless relic as the language in which he wrote. They, and the hordes of others in their circles, ask of a work of fiction not whether it is a thing of truth and beauty but where it might fall on a spectrum of insensitivities, real or imagined, and just how ill-at-ease it might make some readers feel. In Whitman they seek only affirmation of his homosexuality, in Woolf something to say about gender and power. They see no splendor in the leaves of grass, nor the beauty of the pale footfall of the light emanating from the Lighthouse. They seek nothing but confirmation of their preconceived notions, narrow and hard.

It’s bad enough the PEN refuseniks seem so intent in slandering the dead for being what they were not or rationalize some speech as more equal than others with greater contortionism than Cirque du Soleil acrobats. What’s worse is their relativist hand-wringing tacitly justifying the Charlie Hebdo massacre. As Adam Gopnik at The New Yorker said, “The whole end of liberal civilization is to substitute the criticism of ideas for assaults on people.” But I’m sure these days advocating the superiority of Enlightenment principles is punching down.

Chimamanda Ngozi Adichie. There’s a lot to love in this WSJ interview with the Nigerian author, from her criticism of American grocery stores to her observation that “When we talk about the developing world, there’s this idea that everybody should be fighting for the poor” (why is it we so often imagine Africans as existing solely in two groups — either impoverished shack dwellers or jungle rebels — and never consider the possibility of an African middle class?). But what struck me most was this:

She does, however, experience bouts of depression, “the crazy writer illness” that she thinks is common in her field. “There’s something comforting about that, because you feel you’re not alone,” she says.

Some days she writes for 12 hours straight; other days she can’t bring herself to write at all.

“I wish I could write every day, but I don’t,” she says. “When it goes well, I ignore things like family and hygiene, but other days, when it’s not going well, I read the books I love to remind myself of how beautiful and essential and nurturing words can be, and I hope that doing that will bring my own words back.”

Down the Memory Hole. Regardless of one’s political persuasion, the only proper response for historians toward Hillary Clinton is a loathing both total and complete. The Clintons’ contempt for government transparency and the work of anyone who has ever stepped foot in an archives shouldn’t have come as a surprise even before she admitted using a personal server for her emails as Secretary of State or her lawyer’s confession that — surprise, surprise — said server was later wiped clean. Some of us have memories long enough to remember Sandy Berger’s plea bargain (and $50,000 fine) for stealing and destroying documents from the National Archives that dated to the final years of Bill Clinton’s administration — an action I’m sure Berger did at his own instigation, right?

No Gods or Kings, Only Matzo. Unlike BioShock Infinite, which was a slice of awesome no matter which way the cake was cut, the first two BioShocks were mediocre games buoyed by their amazing environmental graphics and a superb backstory. Creator Ken Levine revealed in a recent interview how the Jewish heritage of a number of BioShock characters — a Soviet refugee, a Holocaust survivor, New York doctors and artists — was integral to driving the storyline. To me it’s a great example of weaving together 20th-century history and experience to develop a very authentic alt-hist world. 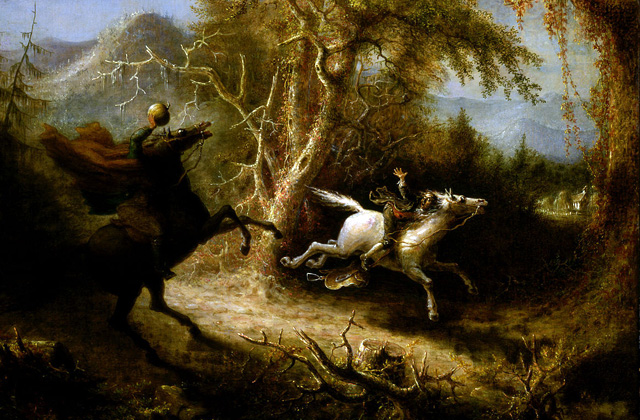 Tracking the Horseman. “Irving is pretty specific about the route Ichabod Crane takes while fleeing from the Headless Horseman.” So noted Scouting New York’s Nick Carr upon rereading The Legend of Sleepy Hollow, inspiring him to visit the Hudson Valley town and retrace one of the most famous chase scenes ever put to paper. His photo safari captured the landmarks of Crane’s flight while explaining their historical significance. Unfortunately it seems the site of Crane’s fateful terminus has been lost to time.

Speaking of Hollows. I recently learned a new word: holloway. Also called sunken lanes, holloways are tunnel-like paths so worn by centuries of traffic that they lay below the grade of the surrounding landscape.

Raising Jakarta. Indonesia announced a 30-year, $40-billion plan to save their sinking capital by creating a sea wall and 17 artificial islands. This story notes that rising sea levels aren’t the main source of Jakarta’s flooding problems; instead, “the city has pumped its water out of deep underground wells for years — leaving empty chasms that are now sinking.” This is somewhat reminiscent of New Orlean’s problem, where the organic material in the wetland, preserved in anaerobic conditions, is exposed to air by drainage and construction, leading to decay. The soil, having lost mass, then packs down and the buildings sink.

Pumpkin Spice My Ears. AC/DC, Brian Ferry, and Foo Fighters all have new albums coming out.

Bracing Tonics. A CRM excavation at the site of a former Manhattan beer garden unveiled a trove of 19th-century bitters bottles. Bitters — tonics that combined herbs and spices along with a hefty dose of alcohol — were used as digestives and medicines at the time, even by otherwise abstinent teetotalers. From the relief writing on the bottles (which today are highly collectible), the archaeologists were able to track down the original recipes, which they then recreated and shared. Also worth noting: in the comments, an author plugged this apothecary recipe book.

Flipping my Lid. Speaking of cocktail books, I recently downloaded food writer Corin Hirsch’s Forgotten Drinks of Colonial New England, which includes recipes I intend to inflict upon our guests this July Fourth. I’ve always wanted to try flip. I’ve had switchel before, but didn’t care for it.

Columbia Uber Ailes. And in not-so-alternate-history news, Fox News reached through a tear and stole the logo for BioShock Infinite.